Joe Montana on the show Thursday.

If I play the interview with Les Miles from LSU people will drive off the road because they will fall asleep. So we will not.

In what was a huge upset, I thought that Croom was the best coach I heard talk the entire week. It was not even close. He laid back in his chair, chilled out, and shot from the hip. Stunning.

Croom gave the best speech I have ever heard from a coach at Media Days. I will play it multiple times today. It was like it was from Field of Dreams or something. It happened in the radio room and it was by far the least attended coach session in the room. People really missed out on some great stuff. I will root for the guy.

There are about 3 or 4 station left here doing afternoon shows. I am one of them. I love being at media days, but I am ready to go home. I have stayed at a La Quinta in Hoover before and it was great, but this time I booked the wrong one. Never stay at the La Quinta off of exit 19 in Birmingham. The shower pressure is like pee. I am dirty, tired, and my back hurts from that stupid bed. I take my home from granted.

Listen to the show.

This is the morning of day 2 in Birmingham. Yesterday, the only thing I will really remember was having Kenneth Darby (RB from Bama) say on the show that he was upset that Kenny Irons and Darren McFadden were both faster than him on NCAA 2007. I think they are faster than him in real life too.

This place is hilarious. I am always baffled at how seriously so many of the radio guys take themselves. I would guess that 50 percent have either have never kissed a girl, or at least not in the last 10-15 years.

The answers that all the coaches give are so predictable. I remember 5 or 6 years ago when I was really into sitting in a room and was in awe of the coaches and players and everything they said. I guess I am getting a little jaded, or maybe its ADD, but I get bored quickly now.

I did not get bored at all with Mike Slive (Commish of SEC) when he was on the show. I thought he was really good and guys with a lot of power intrigue me. I could talk to him about college football and its system for hours and learn a lot. Listening to him always makes me think of how uninformed people can be when they throw out their easy solutions to everything.

Today Spurrier is here. He is in a class above the rest in terms charisma. Spurrier is by far the best, Houston Nutt can be good with the Baptist minister thing, Tuberville is usually good in this setting, Mark Richt was better than I remembered, and the rest are boring.

Today is Ole Miss, Tenn, S. Carolina, and Arkansas. A much better day than yesterday when they put Vandy and Kentucky on the same day (get out the way day).

Ron Higgins says that this is the worst crop of players brought to media days since 1978. I believe him. Usually you get an Eli, or Cutler, or Cadillac, or whoever. This year there are a few names you would even recognize unless you are a big fan of the school they go to. A lack of stars here for sure.

Listen to the show.

Verno
Posted by Chris Vernon at 9:21 AM

Kyle Lowry on the show today

Grizzlies first round draft pick Kyle Lowry will join me on the show today.

Eric Hasseltine (Grizz PbP Voice) will join me today for Grizz Power Hour because we will be in Birmingham for SEC Media Days starting Wed.

Chris Herrington from the Memphis Flyer will also do his segment today.

Gary Parrish (Go read his stuff on sportsline.com) will join us from Vegas

I was at the Rookie presser this morning and we will talk about what Jerry West and the new guys had to say, as well as give you the sound from the days events.

I will be updating this blog everyday from SEC Media Days. Please read it. I will give you a dollar.

Closing out both sides of the trade

Yesterday when Rudy Gay joined us on the show, it closed out both sides of the trade. We were the first show to get Shane Battier on the show after the trade, and the first to get Rudy Gay after the trade. I was really impressed with the attitude and personality of Rudy Gay. He was witty and fun to talk to. Battier was the face of the Grizzlies franchise for good reason, and it will be different not seeing him in a Grizzly uni, but Rudy Gay, on first impression, seemed to be that engaging guy with charisma that people will fall in love with.

I want to thank all of you that are jumping on board with the station, and telling everyone you know. Things are picking up dramatically, and I appreciate all of you that listen. Emails to the station come in on a daily basis commenting on the station. Here is one that we got yesterday. I obviously know nothing about my competition, but I thought the example of yesterdays show was funny. This is the oppurtunity and excitement I wanted. To be a part of something fresh and new. Kevin is our GM.

Just wanted to let you know what a welcome relief your station has been. Sports 56, who I used to be a loyal listener and constant caller, has lately become nothing more than the new AM 790, the voice of the University of Memphis. The reason AM 790 failed was because they were all Tigers, all the time. The addition of Dave Woloshin, the radio voice of the Tigers, to go along with Greg Gaston, the television voice of the Tigers, to go along with George Lapides, the 1930's beat writer for the Tiger's, became too much for most sports fans to bear. While Chris Vernon was interviewing Rudy Gay this afternoon ( a wonderful interview by the way ), the guys at 56 were talking Tiger basketball recruiting for the year 2008. Please stay on the attack, and continue to seperate yourselves from your fast fading competition. Please continue to give us plenty of Grizzly information and other items that are not just U of M related. Unlike the written media in this city, sports talk listeners have a choice. Continue your good work and you will see more and more listeners make the switch to 730 espn radio Memphis.

Today on the show.... Gary Parrish in studio for the show, Keith Easterwood, Chris Herrington
Posted by Chris Vernon at 9:27 AM

I had to try that suit on 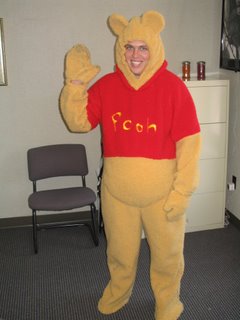 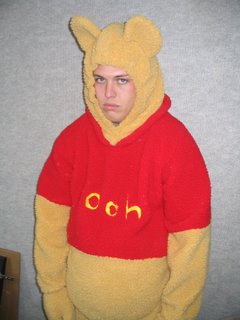 This is what I saw when I came to work today 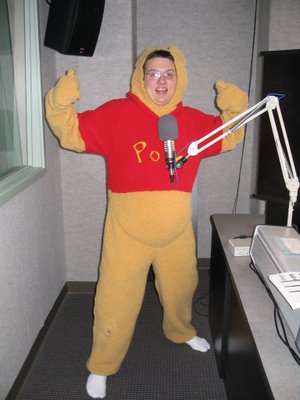 My producer, Jon Roser, ladies and gentleman
Posted by Chris Vernon at 12:59 PM

The newest Grizzly, Rudy Gay, is scheduled to join us on the show today (fingers crossed). Gary has his second article and mugshot up on sportsline.com.
Posted by Chris Vernon at 10:00 AM

You have to see this. I was reading a magazine last night that said to type "crying wrestling fan" into the youtube search. To see it CLICK HERE. Youtube is the best invention ever.

Moron Mike Off 3 is today at 4:20. Special celebrity judge Justin Moore (lead singer of Ingram Hill) will be on the show for the competition.

Shane Battier was great on the show yesterday. I am hunting down Rudy Gay for today to be on the Grizz Power Hour.

Bert Sugar on the show today from Vegas.
Posted by Chris Vernon at 10:52 AM

SHANE BATTIER ON THE SHOW TODAY!

Probably the first hour, if so, I will replay it in the third hour. We will get him right after his presser in Houston
Posted by Chris Vernon at 2:42 PM

One of the greatest moments in radio history will take place on the show on Friday. The much anticipated rematch of Jon Roser and Ladimer the Intern will take place on the show. Roser defends his microphone. Gary Parrish has set the odds, and Roser is a 6-1 favorite. Can he duplicate his timeless performance, or will the up and coming intern shock the world? We find out Friday.

Today on the show...

Eric Hasseltine (voice of Grizzlies) for the Grizzlies Power Hour

New Grizz Point Guard Kyle Lowry UPDATE: Lowry hurt in practice (did not look good) Anthony Roberson will be on instead

Thanks for listening... things are good

Verno
Posted by Chris Vernon at 10:03 AM

It includes Billy Richmond and Waki Williams that played @ Memphis. No Rudy Gay because trade not official.

I have a show on Monday, no show Tuesday. We were gonna do "best of" but have no content for that.

I don't care whatever happens in sports for the next 100 years. This is not happening again.

Vince Carter strattles the 7 ft 2 in Frenchie in the Olympics.

And Gary Parrish told me about this guy he saw on Carson Daly, of course it was on youtube already, and if you like singer/songwriters, this guy is great.

Damn it feels good to be a gangster.