We are giving away another pair of tickets to the entire CUSA tourney today. The show will be live from Buffalo Wild Wings (Hacks Cross location). Get there.
Posted by Chris Vernon at 11:01 AM

At least there is humor in Grizzlies land...

I was just surfing around the internet and clicked on Grizzlies.com. Somebody over there has the greatest sense of humor ever (I hope this is supposed to be funny). I am going to copy and paste this so you can see what it says in case it gets changed...
(this is directly from the front page)

Despite a stellar effort from Hakim Warrick (13 points) and Darrell Arthur (12 points) the Grizzlies could not hold off the Cavaliers in a 94-79 loss on the road Tuesday night. The Grizzlies will travel to Indiana on Wednesday to face the Pacers.

Update: It has been changed now. Boooo. At least it was funny before. Now it says "Despite strong efforts..." Hakim Warrick hit a three at the buzzer and had 1 friggin rebound. The headline should read- "Despite no effort..."

Bring the funny headlines back Grizzlies.com. Don't let this crappy little blog change your headlines. You have a regular Don Rickles working over there. Do not muzzle this person! Let us at least laugh through this.

Michael Lewis ain't telling me nothing homeboy. Sometimes it is interesting, or indicting in some cases, to go back and read the things that I have written in the past. On January 16th, 2007, I wrote a blog post entitled "Losing Shane Battier." You can read it HERE. Several people have sent me the new article in the New York Times written by Michael Lewis, knowing I would appreciate it. I thought the article was great, but he is preaching to the choir with me. Here is the Times article on Battier... The No-Stats All-Star.
Posted by Chris Vernon at 10:49 PM

Coveting DeJuan Blair (vindication is mine)

At the beginning of the college basketball season, I dubbed DeJaun Blair the guy that I loved that was not high on the draft boards. I had to take some grief over this. All of the usual things... undersized, tweener, blah blah. Here is what is proven... the guy has over a 7 ft wingspan, and is an absolute beast. The nation just watched him kill Thabeet (almost literally). He almost ripped his entire arm out of his socket. He just dropped 22 pts, to go along with 23 boards at UCONN. We have to find a way to get this guy in a Grizzlies uniform.
Here are the guys on the "3 Guys I would like to see in a Grizzlies uniform that are not ranked highly (Top 15) on mocks" The list will change and expand as the season continues. First list...
1. DeJuan Blair
2. Jonny Flynn
3. Jodie Meeks
Posted by Chris Vernon at 8:29 PM

The trade deadline (The Final Countdown)

The deadline is set for Thursday at 2 p.m. CST, and this is the only inspiration we need. Pure genius.

A Single Roser 2 (the stunning ending)

If you missed the finale of A Single Roser 2, it is now loaded, along with the rest of the show, in the podcast. Go to www.730foxsports.com. Today was the final interview with the girls, and listeners were allowed to ask questions that they felt we failed to ask. The way it ended will never be forgotten.
Posted by Chris Vernon at 8:49 PM

I am still holding out hope that the Grizzlies can provide the best deal for the Suns to get Amare. If the Grizzlies are not making the deal because of the players that they would have to give up, that is totally insane. You can find a Mike Conley or Hakim Warrick anywhere. In the landscape of the NBA they are totally ordinary. Don't tell me about increased production. If you get minutes in the league, you get production.

By my count, there are 101 players in the NBA that avg. 30 or more minutes per game. Quick trivia-- How many of those don't avg. double-digits in scoring?
The answer............. 3. 3 freaking players-- Jason Kidd, Mike Miller, and Shane Battier (2 former Grizzlies). Anybody in the NBA that gets minutes will produce, some much more than others. And they really can produce if they are on bad teams.

Rudy Gay, who I like, is a guy that might make an All-Star team once. He is a great talent that does not have the moxie to be a truly great player. Think Rashard Lewis.
So, I know that I can find Warrick and Conley anywhere (hell, Chalmers and Sessions are both second round picks and they have shown much more promise as future PG's), and Rudy is the big piece I lose? Where do I sign?

The Grizzlies do have a "core." His name is O.J. Mayo. The team needs to be built with how it will compliment this tremendous talent. You trade for Amare, put him at the 4. Now you have a perimeter star and a post star. In a few years you have two of the top 10-15 players in the league, and you pair them with guys that will play a role. Every great team has role guys. You can have talented players and no role guys (like the Clippers have), and you can have a terrible team. Conley is not the best fit to compliment Mayo at the point, and Rudy is not the best to compliment Mayo at the 3 spot. Your 3 spot is going to be a grinder that can guard multiple positions and hit a corner three. You have your 5 guy in Gasol, he can play that role. Now for my PG I have to find a bigger guard that can stretch the floor to put alongside OJ. This is easy.

The hardest thing to attain in the NBA is a real star. Role guys are the easiest thing to get. The Grizzlies have a golden opportunity to get a star, and if they pass up this chance it will be another horrific decision. These chances don't come around that often. Amare Stoudemire is a machine that nobody (including Duncan in the playoffs) can stop when he is really motivated, and puts up 21 and 9 when he isn't playing his best. The Grizzlies would be total idiots to not do everything, including getting rid of pieces of the crappy "core" that will never go anywhere together, to get Stoudemire.

Bow with me as we pray.
Posted by Chris Vernon at 9:05 PM

Ramon Sessions tonight against the Pacers... 15 pts, 17 assists, 7 rebounds. Go read the article below for context, if needed.
Posted by Chris Vernon at 9:32 PM

The show today featured Seth Davis, A Single Roser 2, and Grizzlies GM Chris Wallace. I get the sense that the Grizzlies have a legit shot at attaining Amare Stoudemire. Why would Wallace invite people to get worked up in a frenzy by calling in and telling them what they want if he knew there was no chance it could happen?
Maybe he would do it because at least people are interested in something Grizzly related, but I get the sense that the possibility of getting Amare is real (considering the multiple reports, and knowing what the Suns want in return). Anyway, if you missed the Wallace segment, or anything else for that matter, you can go to http://www.730foxsports.com/ and go to the bottom of the page for the podcast of the show (which is broken up into labeled segments).
Posted by Chris Vernon at 7:53 PM

Have the CA and Marc Gasol heard about Ramon Sessions?

Remember the two articles in the Commercial Appeal a few weeks ago saying not to trade Mike Conley? When the Grizzlies were talking to the Bucks about trading for Ramon Sessions and Joe Alexander?

Remember how Marc Gasol said the deal did not make any sense? He was right, he was just on the wrong side of things. Let us take a look at Ramon Sessions the last four games, just for fun...

That is just embarrasing. The CA and Marc Gasol never said why the deal didn't make any sense (unless you consider he is gonna be Tony Parker, blah, blah, blah, as a reason), and never even mentioned why Ramon Sessions would not be worth trading for. Maybe I can read 1000 more times about how much better Mike Conley is playing and then I will forget how the CA said (twice, in two columns by two different writers) not to trade him for a guy that is going totally bananas.

Update: this is incredible, there is another Conley article today. Ha! Surprisingly, no mention of who the paper said not to trade him for.
Posted by Chris Vernon at 10:31 PM

Sorry to those of you who count on me for financial advice. I said the Grizzlies would win tonight 84-80 and that the under was the way for you to make millions. While the under did hit (of course), I wanted to be perfect and was off by a point. I am sorry for my error.
Posted by Chris Vernon at 9:35 PM

What to offer for Amare Stoudemire...

If I was Chris Wallace I would tell the Suns that they can choose anything they want except O.J. Mayo. You are looking at attaining a bona fide perennial all-star who has proven that he is even better in the postseason. I love Rudy Gay, but I still don't know if he will ever be an all-star. He could be one day, but I would not bet on it. Mayo is the only guy the Grizz have that I believe will be an all-star, and competing at the highest level in the NBA is about having great players.
I will be the guy with my fingers crossed, hoping against hope that a miracle happens and that Amare Stoudemire plays regularly in the FedEx Forum. Give the Suns anything they want, except Ovinton.
Posted by Chris Vernon at 8:08 PM

Most. Depressing. Photo. Ever.

Roser dances on a pole, but that is not the problem. Where are the girls? Is Roser really dancing on a pole in a room full of dudes? What should I do about this? 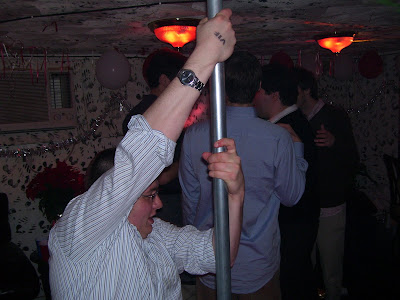